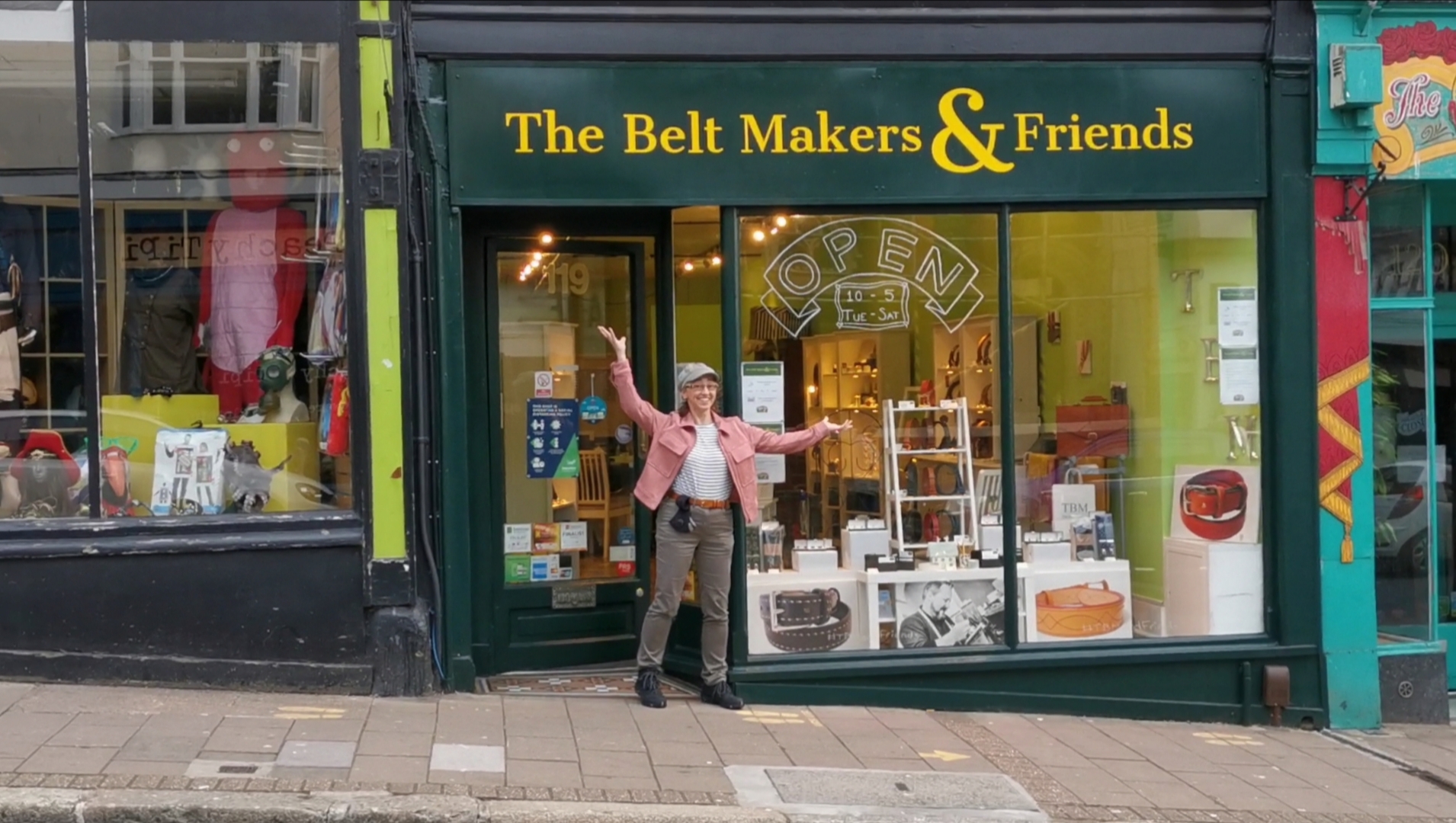 Channel 4 threw down a gauntlet

The other boss and I happened to be watching Channel 4 on Friday or Saturday evening. Working with American Express, Lloyds Bank and several notable other sponsors, they played a short marketing piece for a competition to promote independent businesses. The call to action was: make a video.

Got to be honest, as much as I’m happy to stand in front of people (I’ve called bingo in the past to a hall of 800) and speak about the things that are important to me, the act of filming myself was a gigantic step into a perceptively complicated, and slightly scary unknown. I’ve recorded a few less-than-brilliant Instagram pieces for my charity marathon training but that’s it. No editing; didn’t have a clue where to begin with that.

The prize was for five independent businesses to get a 30 second advert made for them, and be shown on various Channel 4 channels, including during Cats Does Countdown at the end of the month.

It was thanks to Mark that we took up the challenge; I thought it would be too complicated to consider in the short lead time… we had until midnight last night to apply.

A mission of four parts

The task was split into four parts: 30 seconds about the business, 60 seconds about our comeback from Covid-19 and how we keep our customers safe, a 60 second video tour of the premises (had to leave some out to squeeze that in) and they asked for a party trick, also in 60 seconds.

My biggest challenge was going to be the editing. The last time I was anywhere near an editing suite (which was very exciting) I was at college and they used tape. You know, the linear, magnetic kind! You physically cut it up and use special sticky tape to splice it back together in the right place. There was a little guillotine and everything. I was only watching, as that fun stuff wasn’t part of my own coursework.

Naturally, I headed to YouTube school to take a crash course in random-access video editing.

After some searching, a few false starts, and downloading three or four different editing apps on to my phone, I found one that was recommended by a YouTuber and partner, who demonstrated (badly) how they had used it to edit a video on their own channel; shot, edited and uploaded entirely from their phone. It seemed to be a good app that would do all the things I needed but there were gaps in the presentation and I was missing valuable info.

No more time to dwell on that! Next we needed to have an idea of what to say and also where to say it. I didn’t want the first two sections to just be a head shot of one of us doing a ‘piece to camera’ as that didn’t seem to me to be very exciting. I’m not sure that ‘exciting’ actually describes the finished result… but it’s certainly not all headshot interview style.

One thing I was sure of was that I wanted to have both of us in it. There are personalities behind independent businesses and these needed to be represented. Oh my, though: 30 seconds to describe my business? A near impossible task. Perhaps in future I can learn how to add a web address graphic to relevant sections to give more detailed information but yesterday was not that day. Had to go with the extreme abridged version.

Am I a diva for insisting on a script?

We timed each section and I realised that if I was going to speak clearly enough, I needed to limit even further the number of words I used. It got to a point where, when we wanted to talk about normal things, that we discuss with customers on a daily basis, we couldn’t remember any of the words we used! Having completely forgotten how to speak, it was time to sit down, quickly gather thoughts onto paper and start again.

We were on a roll (no pun intended) by the time I stood outside the shop, gesticulated enthusiastically at the signage, and shouted across the road in the hope that the tiny phone mike would pick me up!

Party trick? Did they mean juggling? The only thing we can do that people love to watch is make a belt appear in front of their very eyes.

This normally takes around an hour and a half of careful placement of each and every tool stroke so we were going to have to be artful to fit this into 30 seconds. I was already thinking along the lines of adjusting the video speed… I was putting a good chunk of faith into being able to fathom the missing jigsaw pieces in my editing knowledge, by the time we got back home after filming was over.

It’s all in the teaching

Knowing that the editing was going to take place on, let’s face it, a tiny phone screen, meant that any further research needed could take place on the laptop.

Thankfully I found a great tutor. A no-nonsense, down-to-earth, tell-it-like-it-is Australian called Justin Brown from Primal Video. If you ever need any modern editing help, do try him out. It was a great relief to find a presentation that I could easily digest in the even shorter, short time remaining.

Following his advice I worked backwards and found the right clips. Justin had clearly demonstrated how to pull in different recordings, and quick ways to cut out extra work so although we poured over this project, from scratch, non-stop for around 9 hours, it could have taken so much longer and not been completed at all.

For a first, very green attempt, I’m pretty pleased. Obviously there’s huge room for improvement but we went with what we had, which at the start of the day, was just the phone! We learned some new skills, got our entry uploaded, finished filling in the web form and hit the go button.

For future reference, uploading three and a half minutes to YouTube, and waiting for it to process and become available for watching, takes the best part of an hour. I’ll bear that in mind for next time…

Please do have a look and tell us what you think!

‘Film making: a short but intense journey’ was written by Marie Buckfield 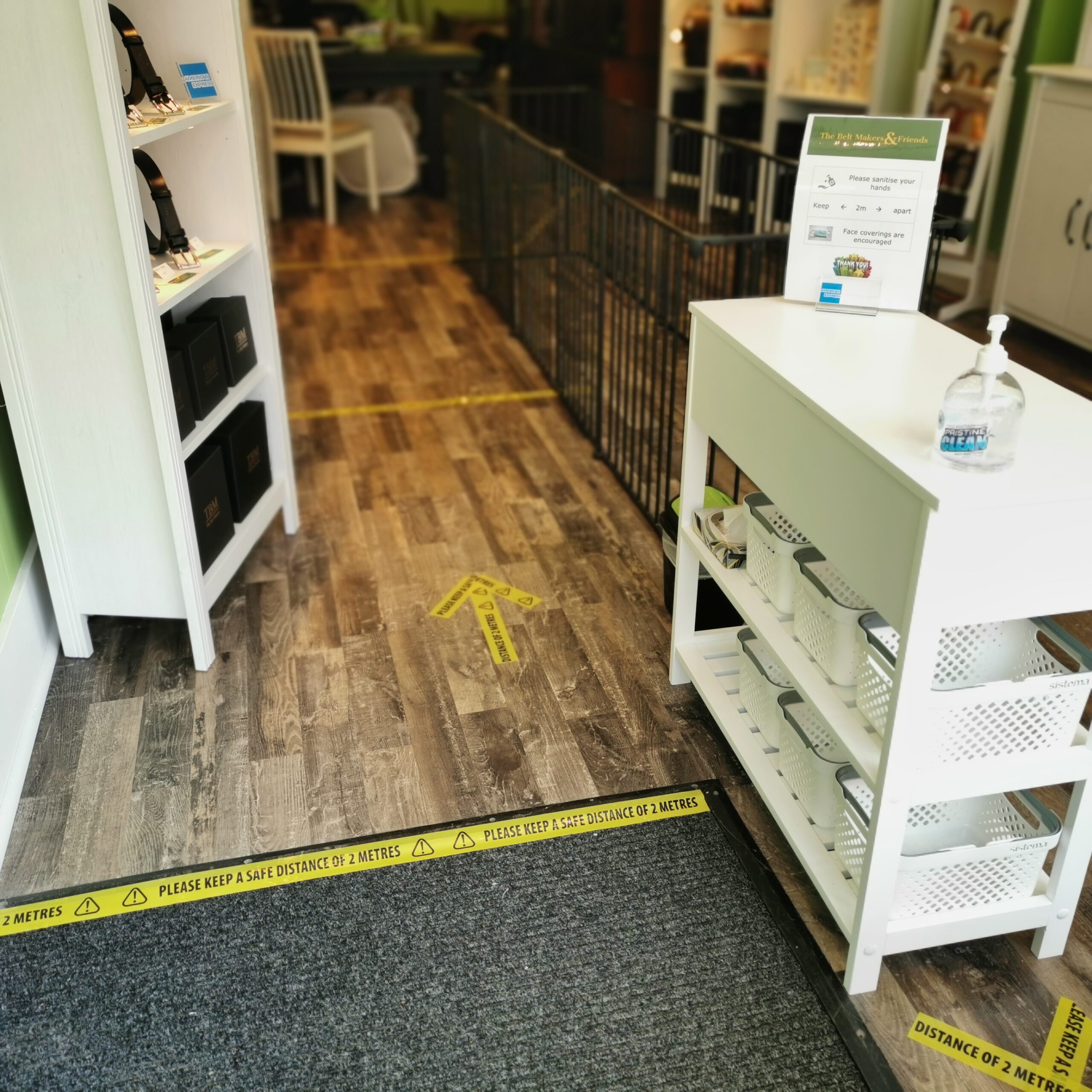 Thank you for a fantastic week!

Ushering in the New Era

We opened our shop to the general public for the first time in months, on Monday 15th June. We had spent weeks pouring over government guidance and WHO recommendations; glued ourselves to Downing Street Briefings and we’d read everything sent to us by email, from local BID, council and national bodies alike; filled in forms and hung up the appropriate posters.

I think we’ve got it about right, until the recommendations are changed again, but that will be for another day!

We have a barricade down the centre of the shop floor, creating a one-way system that is separated from the second side. We have bright yellow floor tape marking both the direction of flow and the 2 metre intervals right across the floor. There is a hand sanitising station on the door and we are encouraging the use of face coverings but it’s not compulsory at this stage. I expect it will be soon!

We have disinfectant sprays for the surfaces. We’re keeping the socks in their plastic packaging so they can be wiped if necessary, and any belts that are tried on are being labelled and placed in the back room until their 72 hour quarantine is up.

Everyone waited politely on the little roundel (that’s two metres away from the till) to pay by card so, all-in-all, I think any uncertainty we had over whether or not we were doing all the right things, or whether we had missed anything, was put at rest.

Shopping for fun? I think I remember…

I do think it will take a while for people to get the hang of shopping for pleasure again, but by Saturday we had new window artwork by one of our Saturday staff, Gus, and there was music playing from the bar doing takeaway service a few doors down from us; the good old Fore Street atmosphere was well and truly dusted off and back where it should be!

We have been beautifully looked after by both regular and new customers alike and it is so appreciated, thank you.

We are so pleased to be able to bring such a lovely range of products to the Fore Street marketplace and this has been made partly possible by having the new website up and running so smoothly, so quickly. I need to give a massive shout out to Aaron from Takeoff Development for all his help and advice; if you need a website get straight on to him!

Do it your way

Remember, there are so many ways to shop with us. You can browse the website before popping in to the shop and you can try on a tester belt for size before you buy. You can order online for delivery, or for contactless collection: just let us know when’s best for you.

You can also book a private appointment for you and your household or social bubble. Pick your preferred contact option to book, or use your favourite social media and find us via #TBMandFriends.

Thank you for supporting our independent family business… see you soon!